Introduction: when my mother died in 1983 I asked if I could have the few family papers. The only Hagan official documents were grandfather's Ben's short birth certificte and his marriage certificate. From that I found his father had been in the 13th Hussars regiment. I obtained a full copy of his birth certificate that gave me his mother's name - Mary Snape. After more than 20 years I found a Census entry for Ben senior: 1871 Preishill Barracks, Edinburgh. From that, his detailed army records gave much detail from his birthplace aged 18 to his death in 1890.

Aims for my Hagan family history.


Since then there has been some progress but no definitive answers to most. See the bottom of this page.

My paper trail is very limited. My father, Lloyd John, was born in Nelson, Lancahire on 3rd Ausust 1915 and he died aged 67. His father, Benjamin, was born at 106 Gregson Street, Everton, Liverpool on 24 January 1888 and he died in Nelson aged 63 years.

Benjamin's father, also Benjamin, was born around 1850. He enlisted to join the 13th Hussars at Clones and gave his place of birth in Ballybay, County Monaghan and his age on 15 January 1866 as 18 year but on both his marriage and death certificates it appears he was only 16 upon enlisting. He gave his occupation as a baker. There is documentation of his life from then until his death on 14 October 1890 at Everton, Liverpool, aged about 40 years. His discharge papers, 10th June 1884, completed 2 March 1886, gave his next of kin mother Sarah Ann living in Belfast, Antrim and his brother John living in Dublin Street, Monaghan. Upon marriage, 27 April 1887 he gave his father's name John, deceased publican (licenced victualler).

An 1856 the Ballybay register gave John Hagan publican and confectioner. It also gave "Hagan, Mrs" a dressmaker. (In 1870 the Ulster Directory recorded for Ballybay a Sarah Ann Hagan - dressmaker, no John).

I have no further Hagan paper trail. February 2021

When my mother died in 1983 I asked her for and was given our family papers. Amongst them was grandfather Ben's short birth certificate. I purchased the long version and found that his mother was Mary Snape and his father was also named Benjamin.

Also was his marriage certificate. He married May Parkinson in 1911 and named his father Benjamin, deceased and sergeant major in the 13th Hussars. 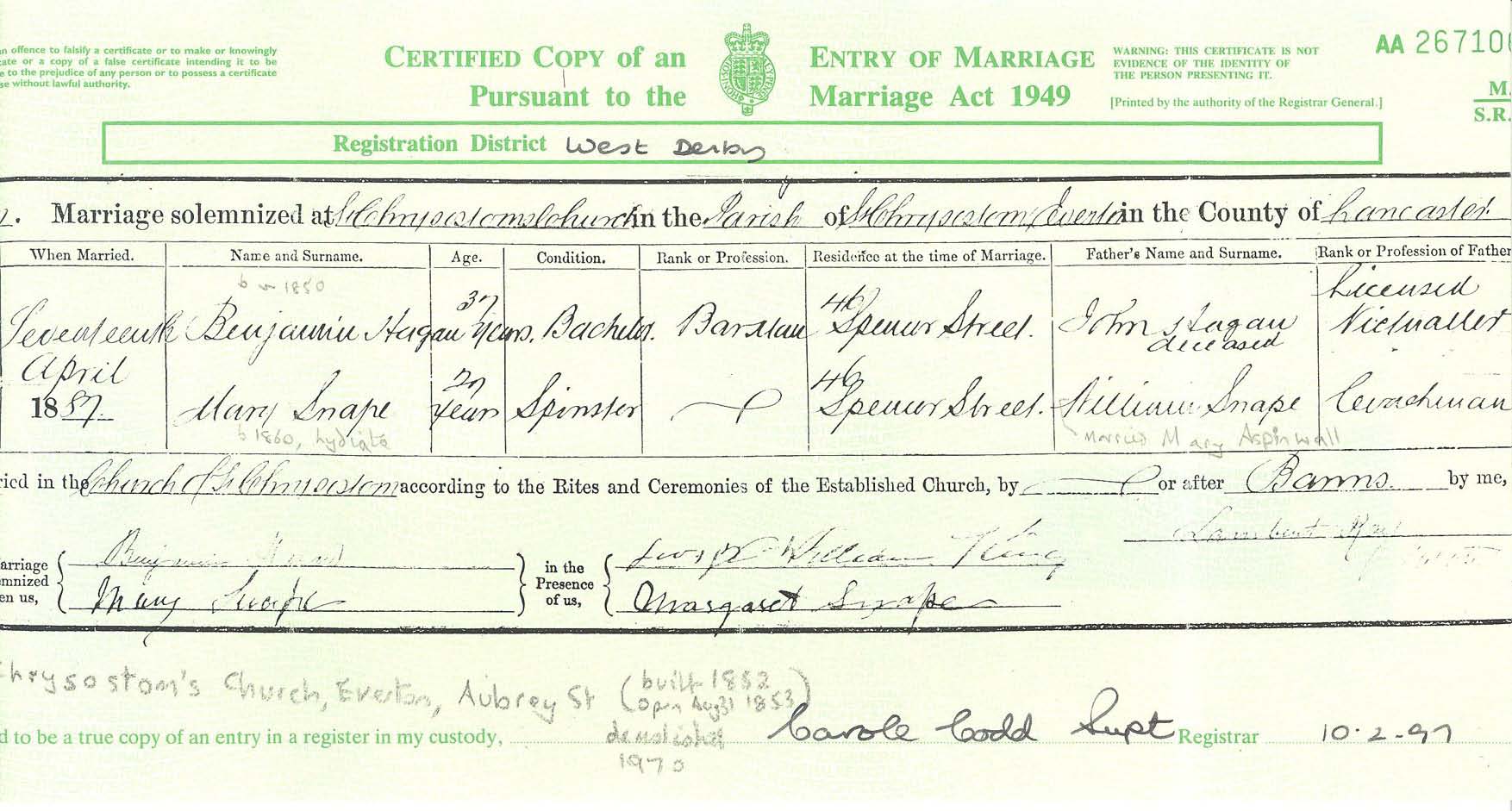 Many years later I was searching gg father Benjamin and found a 1871 census return from Preishill barracks, Edinburgh, Scotland. Benjamin was in the 13th Regiment and was born in Ireland. 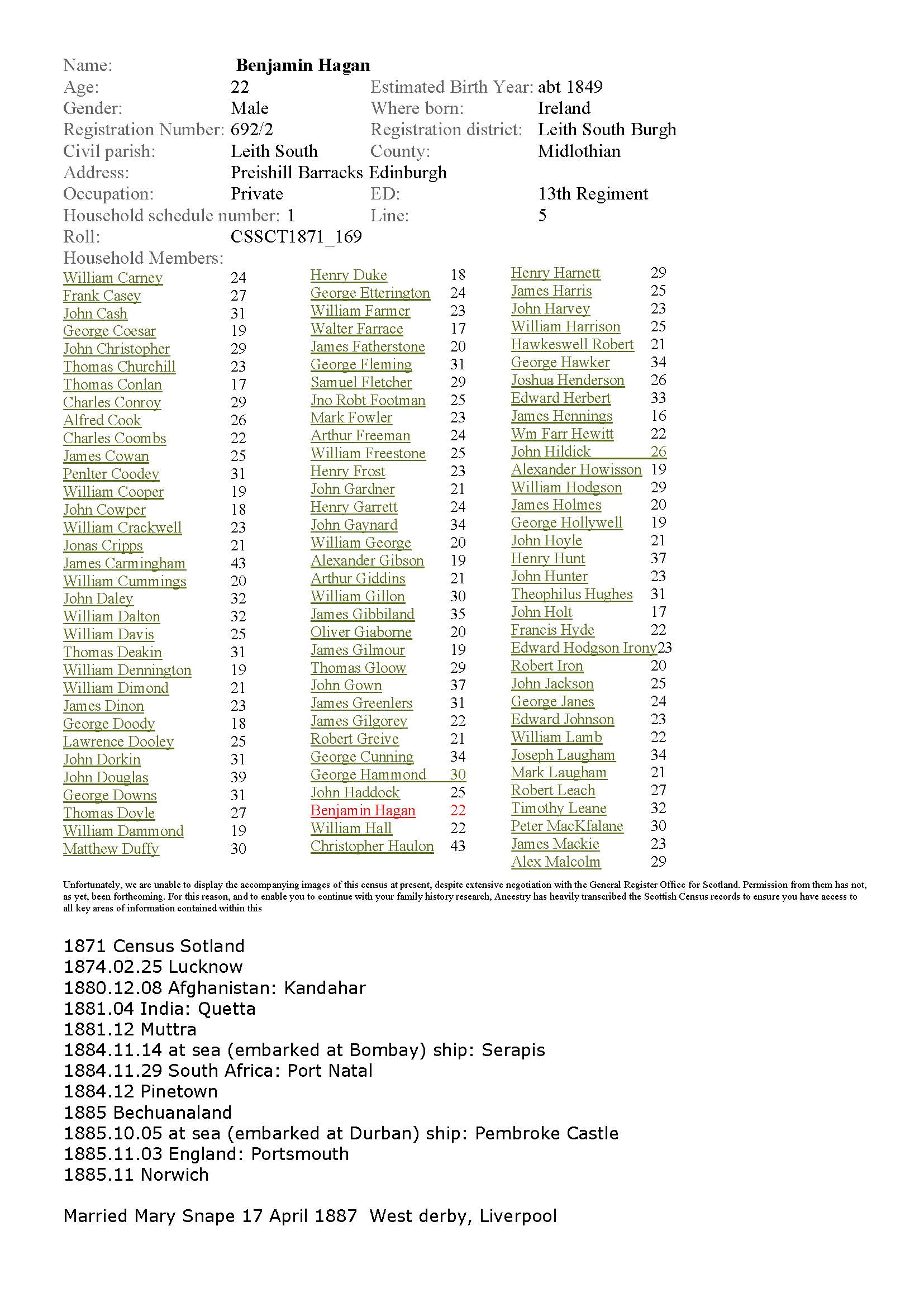 I wrote and asked for his army papers. Two of them had valuable family history information: his recruitment certificate gave place of birth 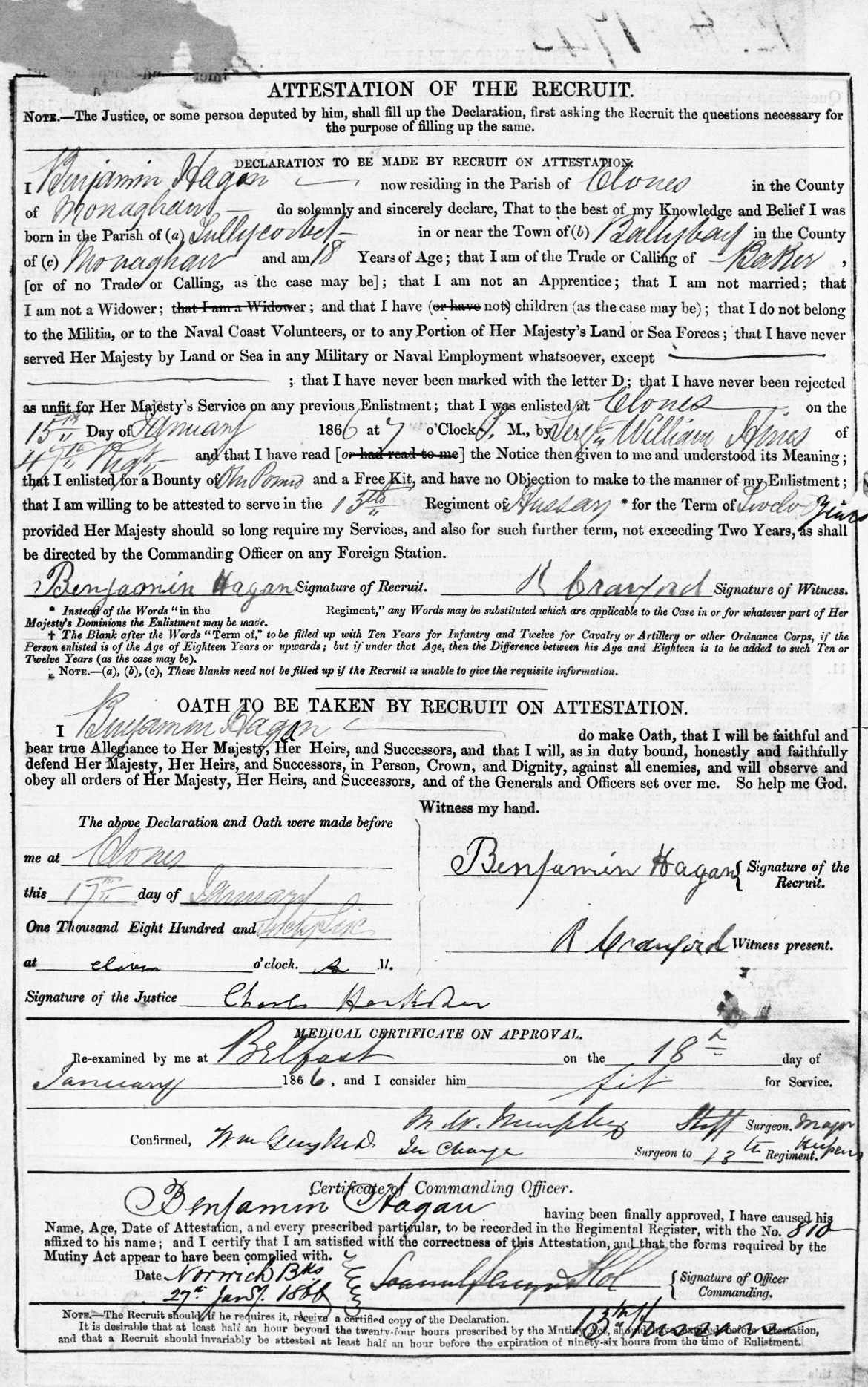 and his Service certificate giving next of kin and where they lived in 1881. 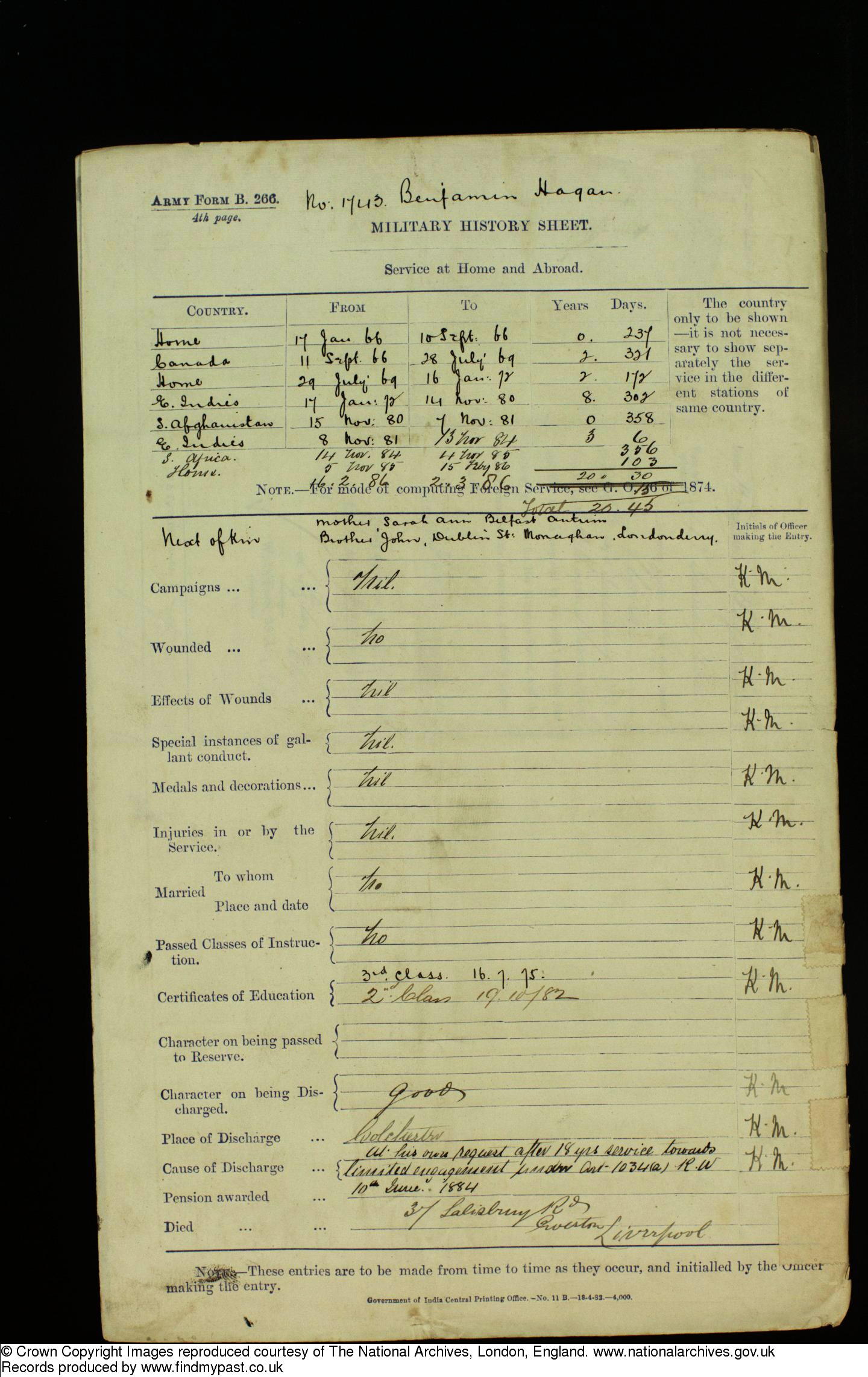 
Below is a copy extract from the uk army British Empire website - the dates and actions are as on his Military History Sheet. 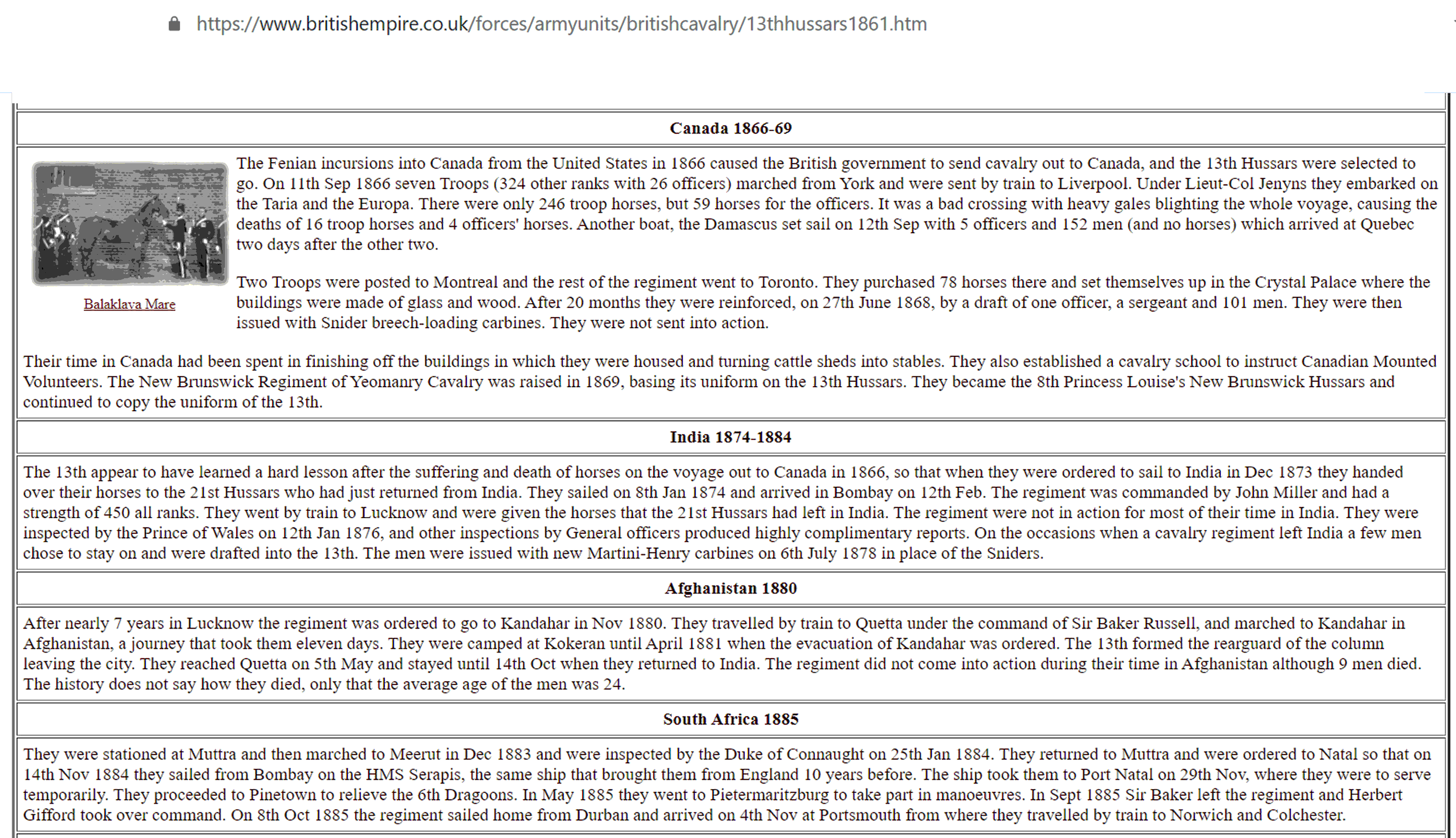 Below is an extract from Baden-Powell (Scouts) writing about his ex-commanding officer Sir Baker Russell. Great grandfather Benjamin is mentioned and interesting - his physique.

When Benjamin left the army in March 1886, after 20 years service, he moved to Everton, Liverpool. There he met and married Mary Snape at Christostom Church, both from 46 Spencer Street, Everton. Their son also Benjamin was born in 24 January 1888 and and Mary was born Q3/Sep 1889 and she died aged 3 Q4/Dec 1892. Benjamin had died about earlier, Q4/Dec 1890 aged 40.

By 1899 Mary and Benjamin had moved to Blackburn where Mary worked in a shop. She could not afford to feed Benjamin so he was placed in an orphanage in Blachburn. Further details click here


In 1861 John and Sarah Ann lived at 147 Main Stree Ballybay, Monaghan and below are copies of Griffith Ireland Valations carried out between 1848 and 1864. This was used to determine the Poor Rate - monies raised to support the poor and destitute. 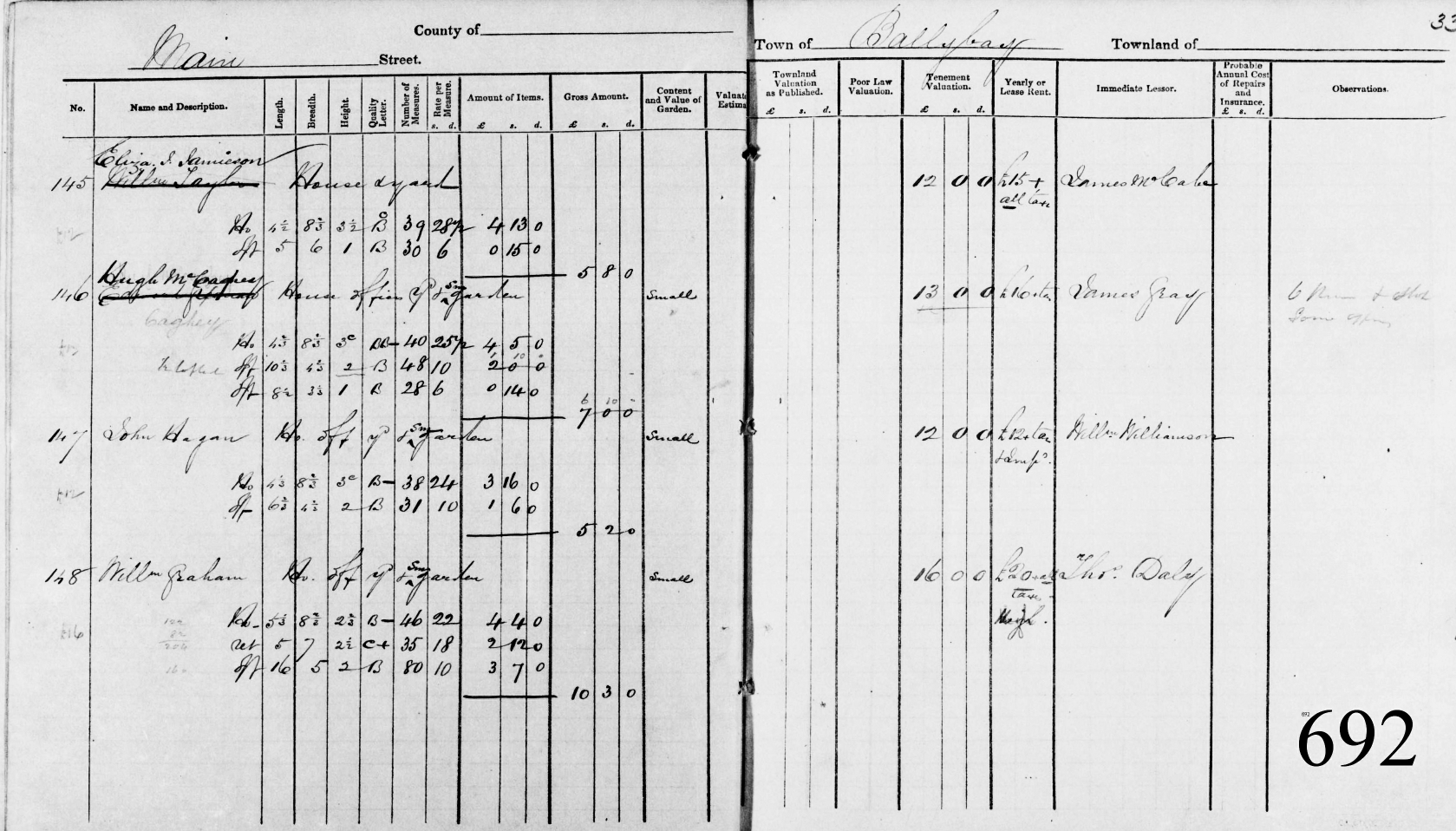 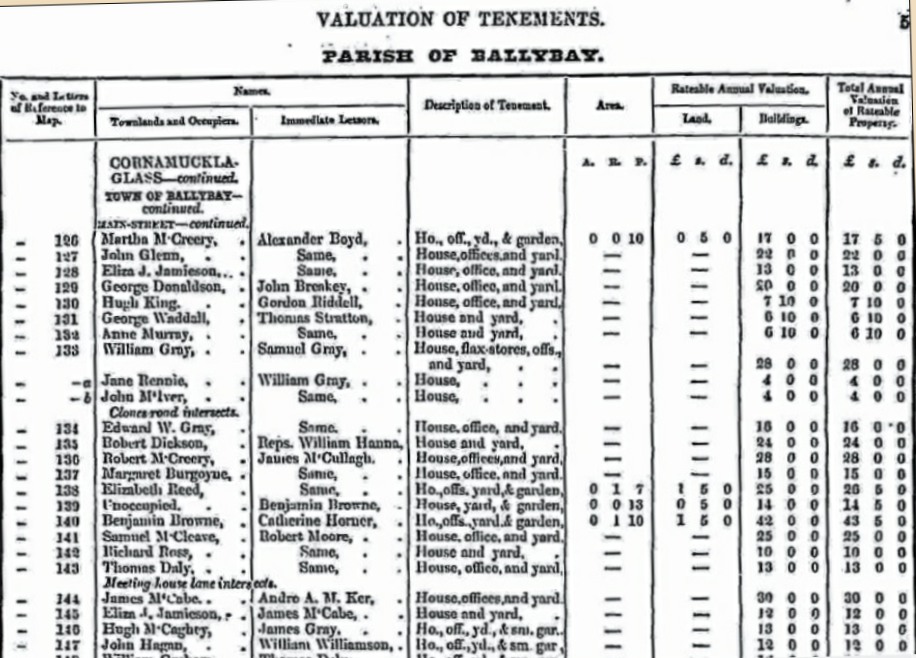 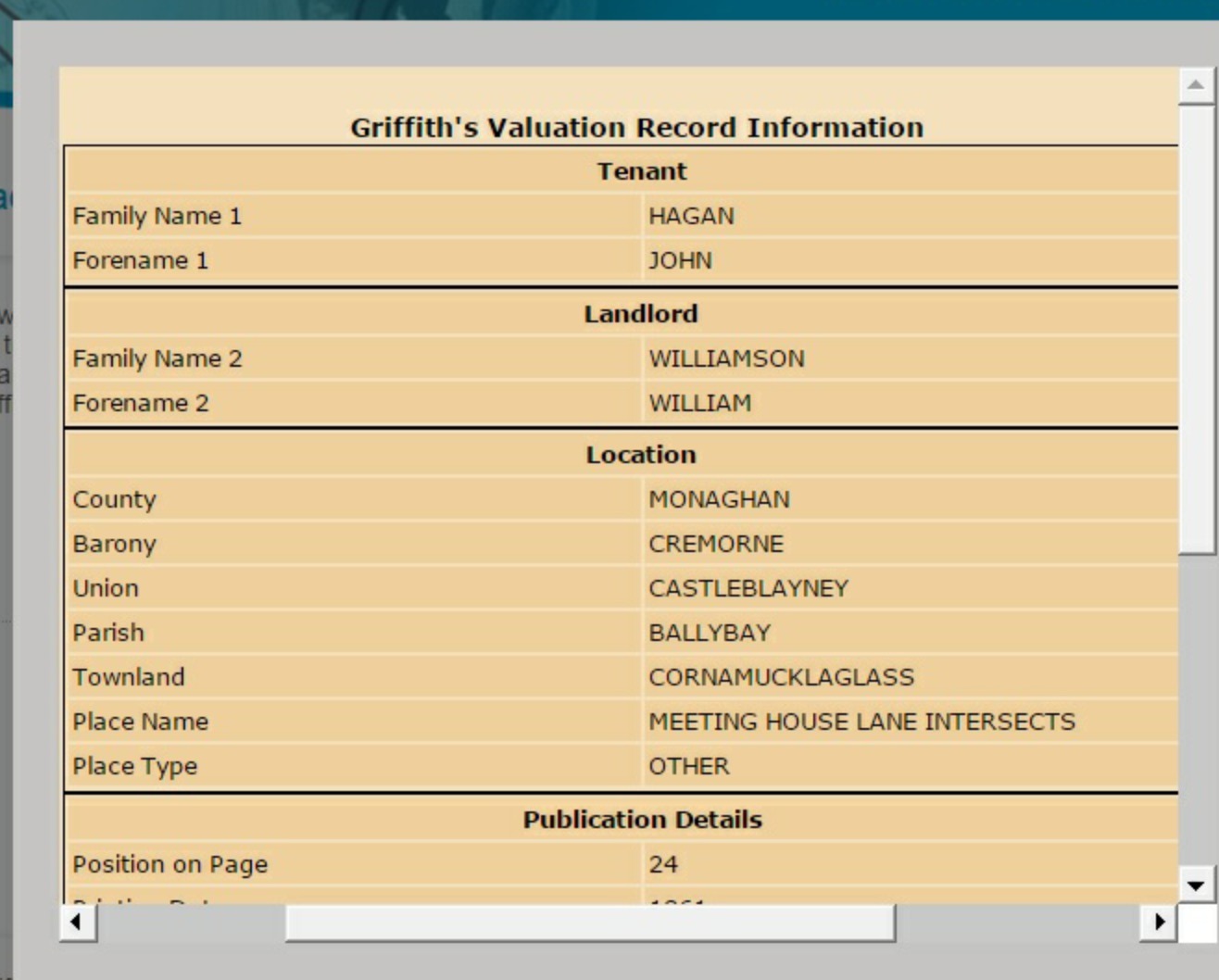 I've marked where their property was before it was demolished to make way for Meeting House Lane widening: 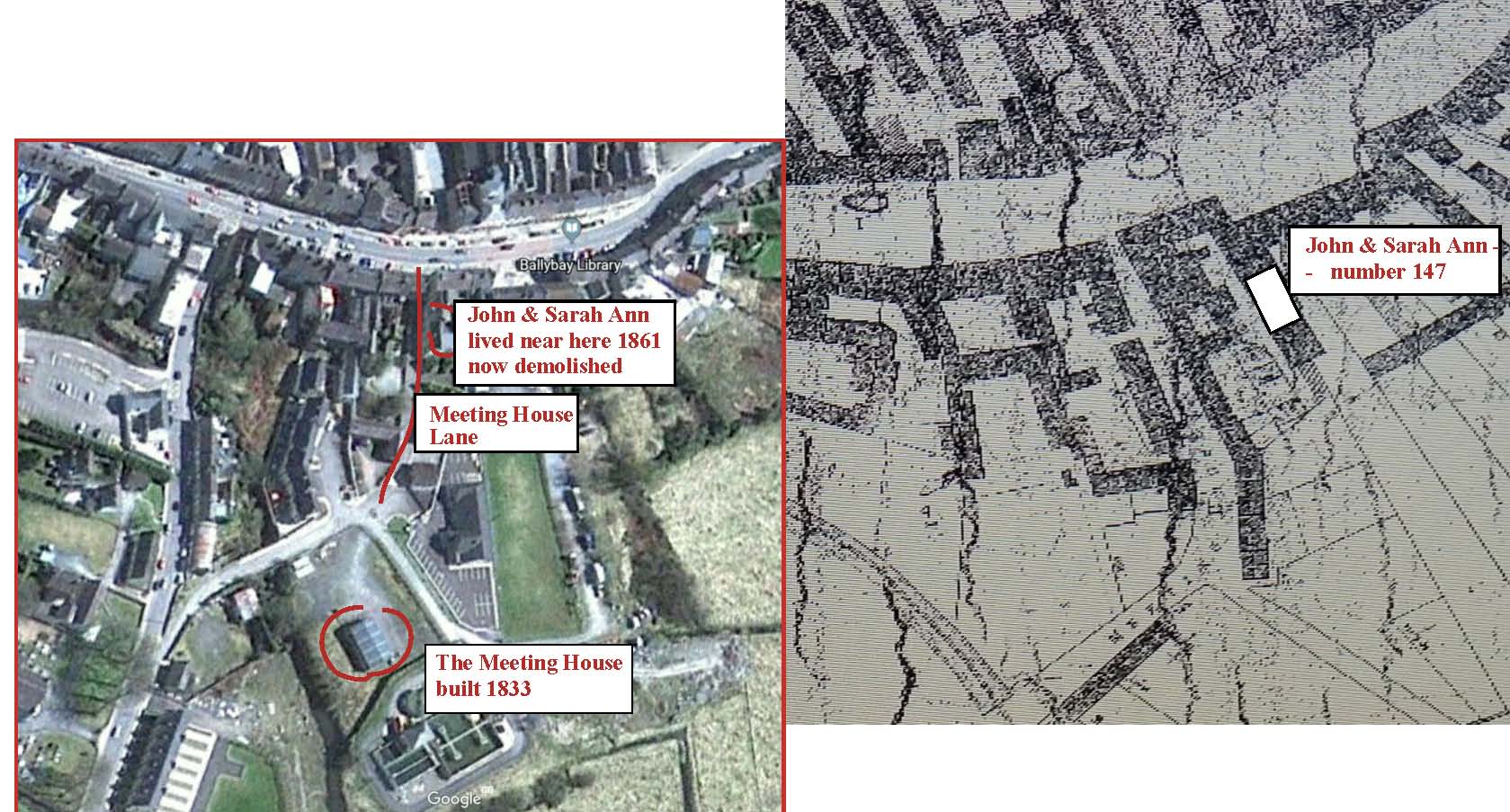 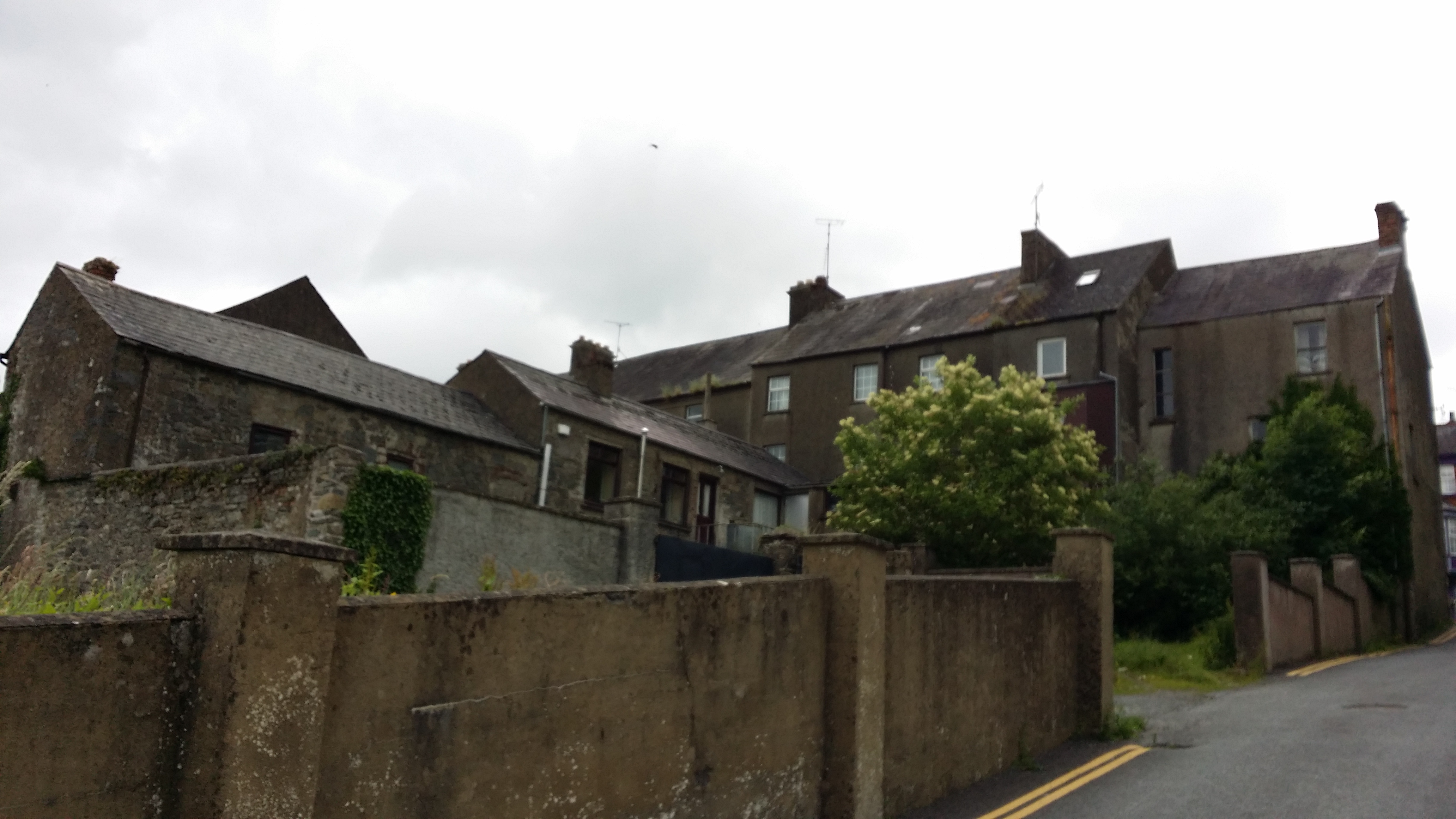 Above and below, as it is now in 2018. Properties around number 147 have been demolished to widen the road. These properties, above left, are similar.

John & Sarah Ann are recorded in 1856 working as a publican & confectioner and dressmaker respectfully. I have been told these were "good" occupations during the Great Famine. 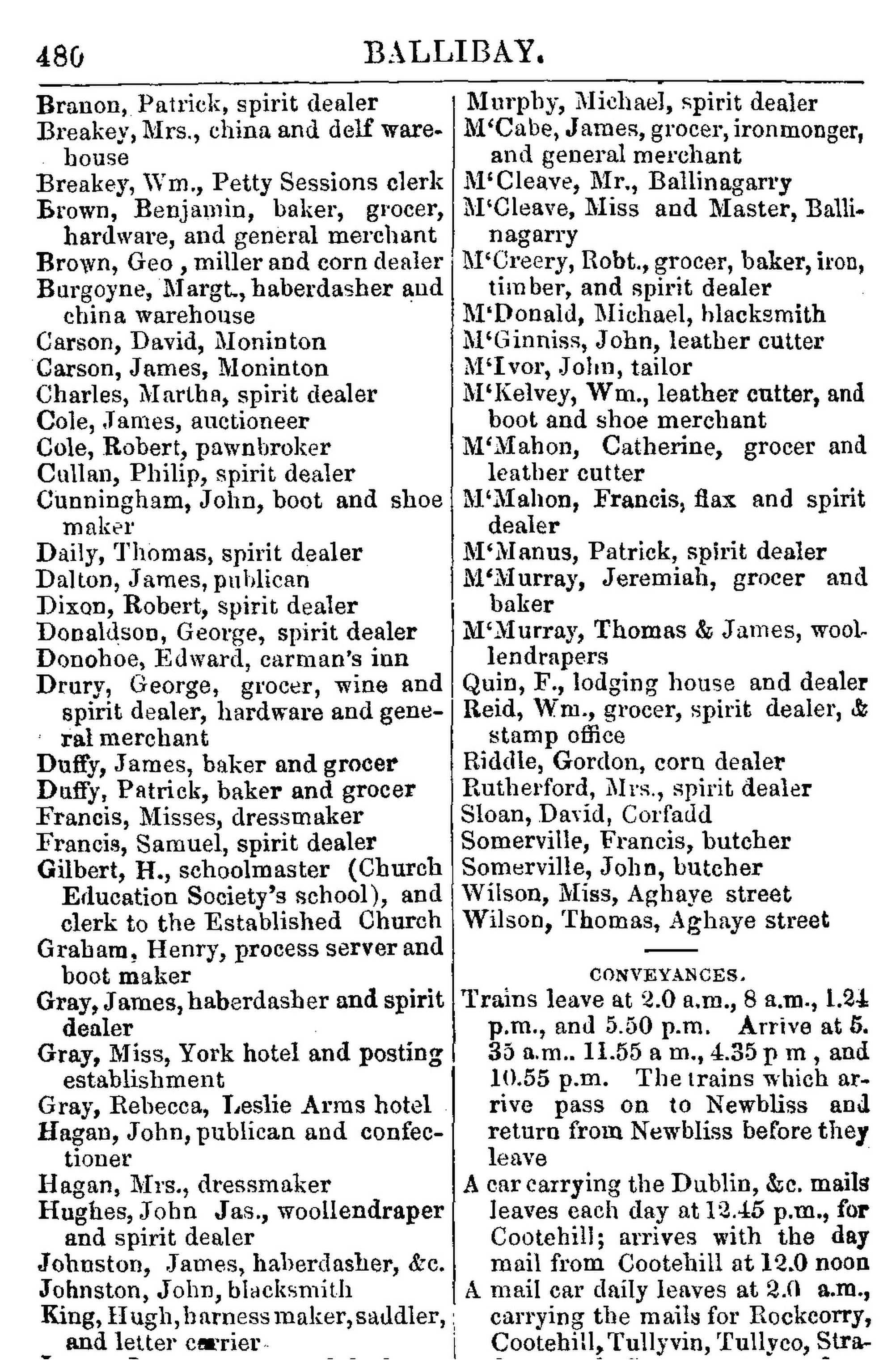 By 1870 only Sarah Ann was recorded in the Ulster Directory as a dressmaker. There was no mention of John.

One of his great granddaughters, Mary Ann, contacted me and kindly provided more details, tree below:

It would be great if I could contact other descendants of John & Eliza Wells. Some of them emigrated to the US.

I wrote to the Orphanage and they kindly sent me copies of their records from his admission to time after leaving.
His mother Mary worked Walmsley's Eating House, 5-7 Church Street, Blackburn for 5 shilling (25p) a week, now equivalent to about £110 a month..
She could not afford to feed and cloth herself and her son so her employer asked if Ben could be placed in the orphanage. He was admitted 25 January 1900 and left 26 May 1902 to work at Mr Butcher's Boot Shop, King Street, Blackburn. From 20th December 1904 he worked at the Print Works and lived at 19 Watt Street, Sabden. In April 1908 he lived at 139 Clitheroe Road, Sabden.